Thousands of years ago labour turned ape to man! Our remote ancestor took wooden stick and stone and learnt to use it so that it would not only let the living easier, but also let man develop!

Today, in our XXI century among the existing nano and space technologies, devices and gadgets, we managed to feel the connection with history like never before!

We’d like to tell you about a thing that impressed us really deeply. The invention we have no willing to find any alternative to… none of them can match it!

The article is devoted to serving mallet. 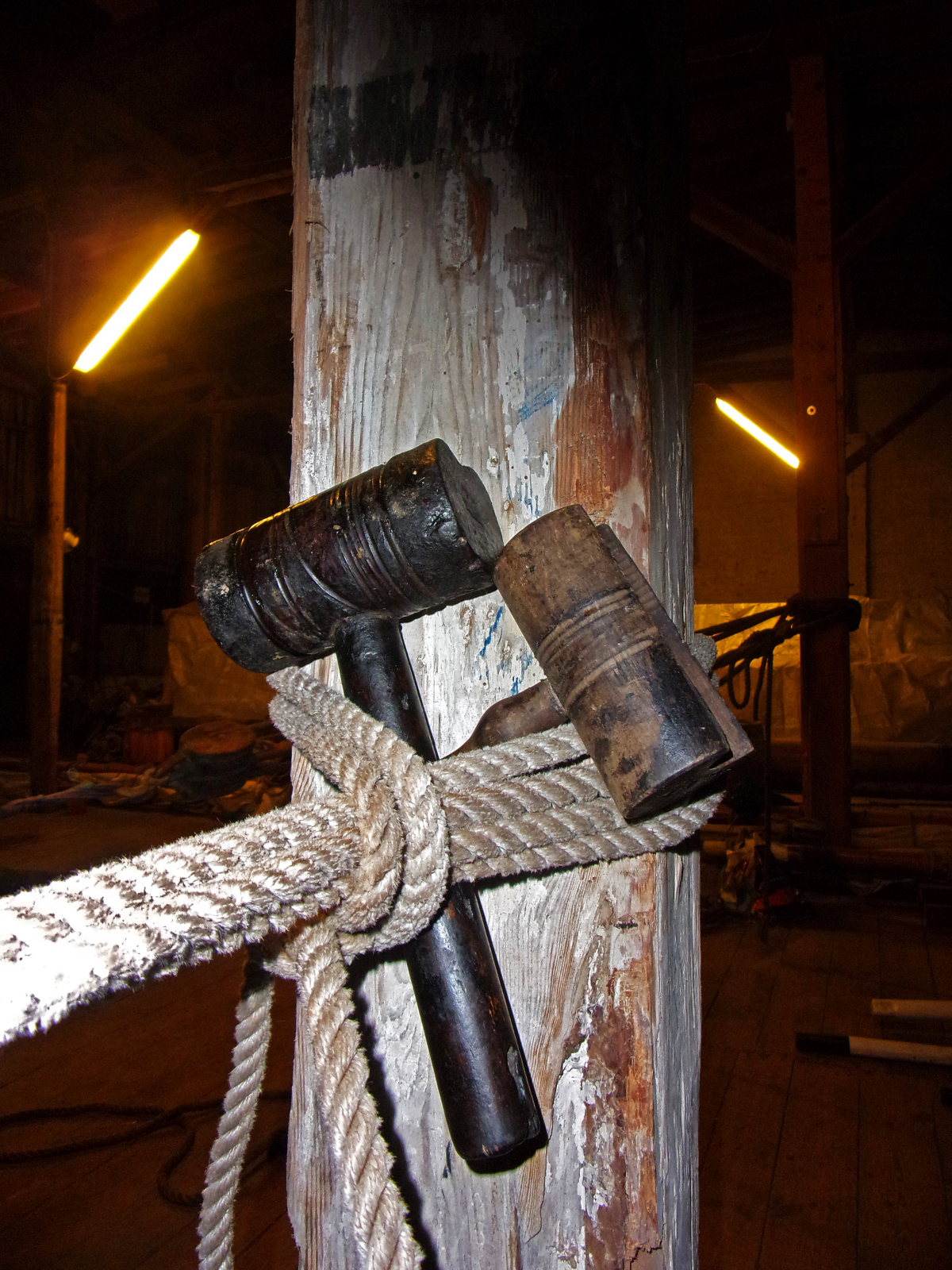 Serving mallet is a small wooden hammer with a groove on it going along a hammer’s poll which one lays upon a rope. It’s used when imposing seizings and ropes parceling.

Parceling is a coiling of a rope with a narrow sailcloth stripe. Then, above it, canvas thread is coiled in order to make the rope’s surface flatter. One cuts off a narrow long sailcloth stripe – parceling canvas, one covers it with tar or drying oil and spirally wrap around the needed part of the rope. Having fastened the end of parceling canvas with a mark, one imposes keckling above it which is made of pretty strong cord not spoiling the rope’s appearance. One wraps the keckling kinks as tight as possible. The kickling end is then fixed the same way as the other one by the mark is passing it backwards under its kinks.

Some feedback from the participants

— First we fixed some short shrouds’ parts on which the kickling was worn out. So we had to use a heaver. It took lots of our power but the quality though was not the best. But when we started making a new strap of top block of top mast furling (hard to explain), we had to learn the historical method. No, this is not the first time I am dealing with a serving mallet, I used to have a chance to serve quarter backstays in 2013, but first I saw how it works in 2011 but I didn’t feel the deep the sense of it though. But each new time it’s fantastic! If you only saw those kinks! This miraculous gadget makes each kink lay incredibly tightly and evenly. One starts to get into rush after each serving mallet turnover. And finally, one stays very glad of what one has created!

First coming aboard the ship in Spring, 2012, I heard a lot about a strange thing with no less strange name “serving mallet”, but only now I had a chance to see how it works. Before I only saw pictures in different books, heard some indistinct explanations, so I couldn’t get the clear image of parceling. But one good… German… dull… frosty (no, not like that!) beautiful morning…

Having looked at a picture in a Dutch book and having made some manipulations that looked like a magic ritual with a serving mallet, Nastya announced “Well, something like that!” and started to serve. And for some reason the kinks happened to be very tight and beautiful, one close to another squeezing out oily tar stripes. After all the endless torments with a heaver it looked just amazing. Whaaat?! How with the help of a big gizmo looking like a dirty wooden hammer one manages to execute this fine work? By the way, I was the “Person with a Reel” in that story and this thought going through my mind on and on was stopping my simple work. The mallet’s handle was going round and round quicker and quicker so at some moment I got a feeling we were going to take off. But I didn’t like at all to be a “Person with a Reel” when this incredible “devil machine” is being used, so a bit later I took part in parceling as well. But this is not the point. The point is that as we were moving along the rope (while it was getting wrapped with more and more new parcel kinks shining with tar and linseed oil) a belief in mankind was raising somewhere inside of me. One can’t describe my admiration of human mind force expressing itself from time to time through my yelling like “Wow it’s cool!” Well, it’s hard to explain, it’s easier to show you that, so come for parceling yourself!

As a matter of fact, we got assured that “not God but man makes pot and pan”! That was useful and interesting experience.