Here we say ‘no’ to loneliness, secret bays and calm waters! We look forward to pass through the busy English Channel or La Manche in french version alongside heavy supertankers, white passenger liners and purse seiners.
As if by the sweep of a magic wand cold Northern sea will change to the waters of warmer shores of France. Basing on our experience those sudden changes happen after crossing the line Douvre - Calais.

We start in Zaandam which can be called a dutch city of Peter the Great. By Noordzeekanaal we are going to reach the entrance to the North sea through the gates of Imauden. From there we set course to Pas de Calais, which is the most narrow place of La Manche. Here tidewater streams are the strongest - which bring a great possibility for sailors to learn how to count the time of high tide, so that the ship could make the sailing plain with the fair current. 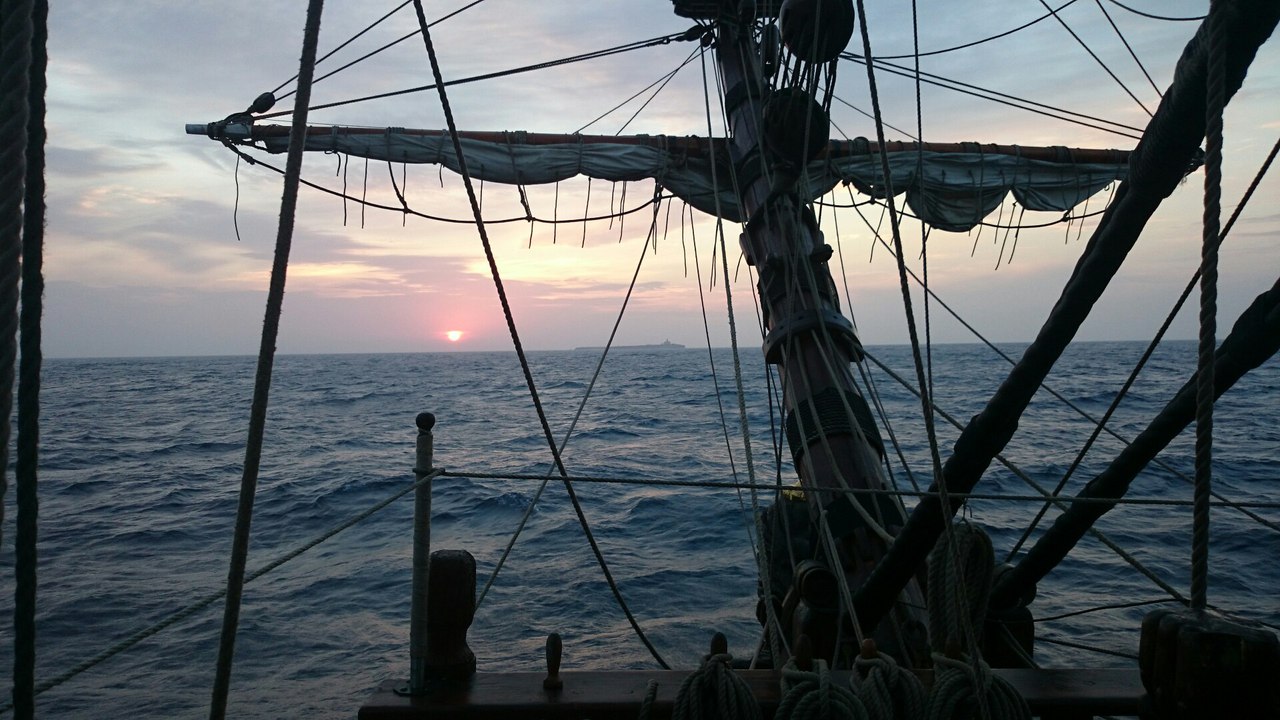 When Pas de Calais is left behind we are going to enjoy all the advantages of going south. On the right hand there is the busy navigation pass with trading vessels hurrying their way to Europe, and on the left hand there is high cliffed coast of France.
By the way we will try to visit several towns depending on weather - belgique Ostende, french Calais, Dunkirk or Dieppe.

The journey will be finished in the picturesque Honfleur’s harbor, which was painted by so many famous artists. We will be welcomed by the saint Catherine church (which has the soul of a ship as it was built by the local shipbuilders) as well as companionable citizens most of whom remember Shtandart very well and show happiness every time she arrives.

Busy La Manche – is an ideal place to learn modern navigation. We are going to study the rules of passing other vessels and particular aspects of marine roads’ traffic. In practice while gazing at the lights of ships passing by we will distinguish if that is a trading vessel or fishermen checking their nets.
On board of Shtandart we never have unoccupied tourists who sit without theory or practice. Thus every sailor who understands theory of radio contact will hear immediately what is going on in the real time ship navigation of England, France or Philippines. The training programme ‘VHF short range radio operator’ is completing this voyage in the best way .

How to go from Honfleur:

- direct bus Ouibus to Paris.
Or by local buses: Bus Verts du Calvados №20 / №50 till Deauville/Trouville, Lisieux or Pont-l’Evêque, and after by train to Paris. The road will take  3-4 hours.
Timetables and tikets:
Buses  ,  ,
Trains   или

How to get to Amsterdam:

- by plane from the Schiphol airport;
- by bus from the any other nearest city of Europe
Timetables and tickets: ,  (for traveling inside Euorope)