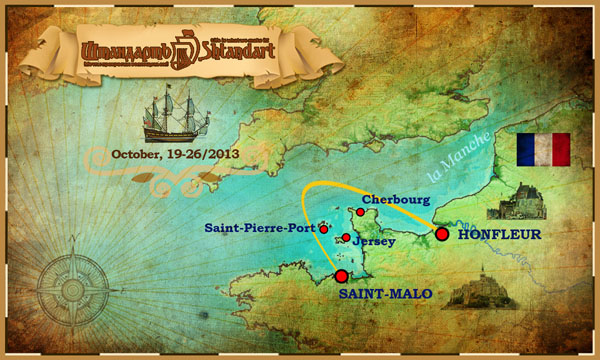 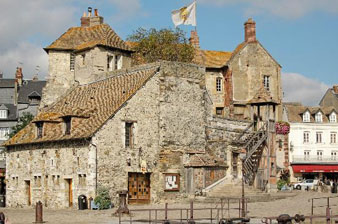 In the beginning of XI century (a thousand years ago) Honfleur was already an important commercial port on the northern European coast. For centuries it has been the main link between the island and continental dominions of the English crown and therefore a titbit for the French corsairs who managed to take over the city several times. They commited daring raids to the English ports on both sides of the Channel from here.

Honfleur is interesting for us not as the sea trade center or Frenc corsair base. In XVI-XVII centuries this city has forever written itself in the history of Great Sea Voyages and geographical discoveries having interrupted the hegemony of the Spanish, Portuguese and English in Atlantic. A French ship "Hope" (L'Espoir) from Honfleur has first reached the Brasilian coast in 1503. Its captain Binot Paulmier de Gonneville was initially headed to the Cape of Good Hope and the final conclusion that the "paradise ground" he discovered was actually the South American coast around the St.Catherine's island was made only 400 years after his arrival, though it does not understate the importance and greatness of his discovery.

Also both from Honfleur and Saint-Malo (another important point of our fall voyage) took start multiple French expeditions to Canada that lay foundation for the French colonies in North America. In the beginning of XIXth century the Honfleur harbour grew shallow and the city started a new chapter in its history. The main merchant ship flow moved to the neighbouring Havre.

Economically the city fell to decay however as it often happens this is why it could save its historical image having slowly become a provincial sea resort. Many artists, composers and poets used to spend holidays here, including Turgenev, Pissarro and Renoir. An interesting fact is that in Honfleur there is a monument dedicated to Turgenev's Mu-Mu. During the staging post the Eugene Boudin's museum will be available to attend.

Eugene Boudin was a bright artist, father of the impressionism and Claude Monet's mentor. Also you should absolutely visit the St.Catherine's church - one of the very little remaining wooden temples in Western Europe.
This church was built in the years of prosperity of the "sea" Honfleur - about 400 years ago. It was built by shipwrights inspired by viking traditions and reminds of a ship turned over.

Honfleur - Saint-Malo passage isn't long - just around 170 sea miles. This means we will have time to stop at some interesting ports on the way and a perfect opportunity to enjoy slow sailing. Most probably we are going to visit Cherbourg - one of the cities in Normandy built by vikings and a French naval forces base. The other possible stop is St.Peters Port on the Guernsey Island  - an independent state under English crown protectorship.

During the second half of our passage we will come across the biggest island in La Manche - Jersey. Jersey is formally an independendent state under the English crown protectorate (as well as Guernsey). It is not part of the United Kingdom and is even not a part of the European Union. There is its own parliament, laws and even its own language here (though no more than 5% af the island inhabitants speak it nowadays). 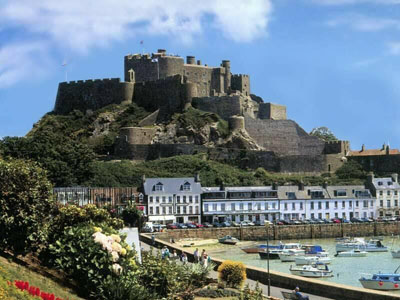 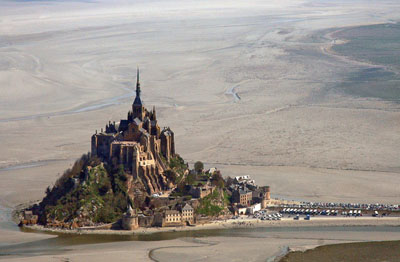 The fortress safely guarded on all sides gave its owners control over both the shore and the sea routes, so for centuries militant St.Malo inhabitants have collected toll from every passing ship and did not despise freebooting.
Both English and French ships have become local inhabitants' victims - the city did not recognize the supreme authority of the huge European monarchies for rather a long time. It even refused to obey the princes of Brittany who used to have bigger influence in the region.  The medieval motto of Saint-Malo used to be "Not French, not Breton but Malouins" and the city even stood as an independent republic for some time in XV century.

During the Middle Ages the city has been spreading constantly, the fortified island grew together with the continent and by XVI century the city has turned itself into a big commercial port. The massive city walls however leave no doubts in the city's military past. Having started commerce the islanders did not leave their pirate practice so St.Malo became the biggest corsair, smuggler and slave merchant base on the Frenc Atlantic shore soon enough.

This is where the famous corsair of the Napoleon era, one of the first Legion of Honour knights, the "Corsair King" Robert Surcouf was born.

Mont Saint-Michel outline is easily recognised owing it to the spires of the monastery situated on the very top of the clif in the middle of the island. The unique creation of both human art and nature, the castle has inspired people for centuries. It was praised in tha medieval bards' songs, painted by the Renaissance artists, Claude Debussy wrote his music here. Mont Saint-Michel is mentioned in many books and it has been the prototype for the fantsy castles in the Hollywood Lord of the Rings. Nowadays the population of Mont Saint-Michel is 40 people. And it is visited by over 30 million people from all over the world. The tourist flow gets lower in the fall so we will have the chance to become familiar with the beauty of this unique place without the tourist crowds. 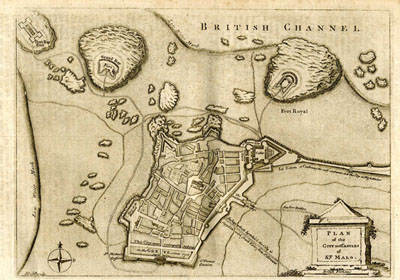