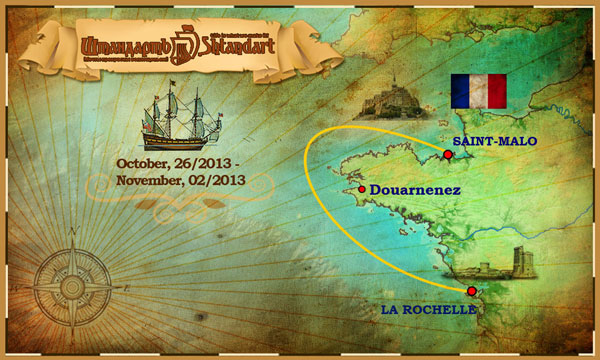 The fortress safely guarded on all sides gave its owners control over both the shore and the sea routes, so for centuries militant St.Malo inhabitants have collected toll from every passing ship and did not despise freebooting.
Both English and French ships have become local inhabitants' victims — the city did not recognize the supreme authority of the huge European monarchies for rather a long time. It even refused to obey the princes of Brittany who used to have bigger influence in the region. The medieval motto of Saint-Malo used to be "Not French, not Breton but Malouins" and the city even stood as an independent republic for some time in XV century. During the Middle Ages the city has been spreading constantly, the fortified island grew together with the continent and by XVI century the city has turned itself into a big commercial port. The massive city walls however leave no doubts in the city's military past. Having started commerce the islanders did not leave their pirate practice so St.Malo became the biggest corsair, smuggler and slave merchant base on the Frenc Atlantic shore soon enough. This is where the famous corsair of the Napoleon era, one of the first Legion of Honour knights, the "Corsair King" Robert Surcouf was born. Mont Saint-Michel outline is easily recognised owing it to the spires of the monastery situated on the very top of the clif in the middle of the island. The unique creation of both human art and nature, the castle has inspired people
for centuries. It was praised in tha medieval bards' songs, painted by the Renaissance artists, Claude Debussy wrote his music here. Mont Saint-Michel is mentioned in many books and it has been the prototype for the fantsy
castles in the Hollywood Lord of the Rings. Nowadays the population of Mont Saint-Michel is 40 people. And it is visited by over 30 million people from all over the world. The tourist flow gets lower in the fall so we will have the chance
to become familiar with the beauty of this unique place without the tourist crowds.

After leaving Saint-Malo we are going to exit La Manche for Atlantic and turn East into the Bay of Biscay. We will have over 400 miles to La Rochelle so the passage will take several days. A sea passage this long gives a wonderful opportunity to forget about the worries and troubles left on the shore getting fully involved in the ship crew life. We might make a short stop in Douarnenez - one of the fishery capitals of Brittany where Tristan separated from Isolde has found his last dwelling according to the famous legend. 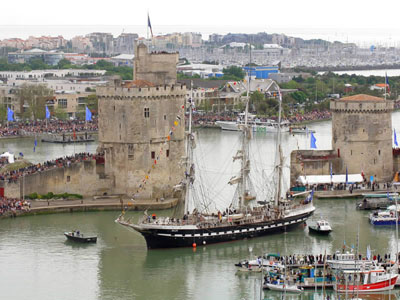 La Rochelle is probably the most picturesque city on the French Atlantic shore. Founded in X century the city has become the biggest port in the Bay of Biscay and the transfer point for the Mediterranean merchants sailing to England and Netherlands in just 200 years. In the early Middle Ages La Rochelle managed to stay relatively independent from both English and French monarchies — mostly owing it to its status of the biggest Order of  Knights Templars base in the Atlantic. The Knights Templars have protected not only the city itself but also its commercial interests having taken the wine and salt trade that brought prosperity to La Rochelle under their control.

The city owes one of its legends to the Knights Temlars — according to it the Holy Grail had been moved here a little time before the crushing defeat of the Order. The day before Philippe IV signed the decree calling for arrests of the Knights Templars and their property the Order's fleet had left the La Rochelle port loaded with the riches and relics heading to Scotland according to one version and to the North America according to another.

There is no evidence of its future fate. 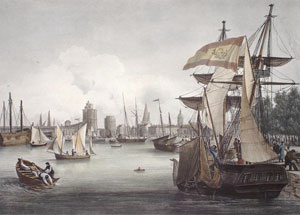 During the Renaissance La Rochelle inhabitants have supported the Reformation ideas and the city has become the French protestant - huguenot center by the middle of XVI century. The independent period finished in 1628
when the city was captured by the French catholic king Louis XII. The La Rochelle siege is described in "The three musketeers" by Alexander Duma.
As well as the other ports of our journey La Rochelle has played an important role in the history of the Great Geographical Discoveries. In XVI-XVII centuries the city has become the center of the French colonial trade: African slaves, Carribean sugar, Canada fur — everything was getting here. Rene-Robert Cavelier de La Salle's ships left for the new grounds from here. He was the founder of the first French colonies in the modern Louisiana, Illinois and Mississippi. It is interesting that La Salle's idol was another French discoverer Samuel de Champlain who was born on La Rochelle and whose name is tightly connected with the history of many cities on our way — Honfleur, Saint-Malo, Cadiz.

The very first chapter in the history of far sea routes started in La Rochelle was written long before Champlain. In 1196 a local merchant Alexander Ofreddie has turned all his wealth into the fleet of 7 ships that sailed to Africa in search of gold and ivory and were to return in a year. But they did not come back neither in a year nor in two or three. Ofreddie's trade company crashed and he ended up on the streets as a pauper. His ships came back to La Rochelle in 7 years all seven of them loaded with African treasures. Alexander OFreddie became the richest person in town in a day and dedicated the rest of his life to helping the poor. The central district of La Rochell is named after him.

Having preserved is historical image La Rochell became a popular port among the yachtsmen and tuorists in XX century. The historical harbor protected by massive walls and two chain towers nowadays welcomes cruise yachts
and tour boats. Just several kilometers from the city in the Pertuis d'Antioche Fort Boyard is situated - impenetrable jail fortress once has been made famous by widely known television show and open for tourists nowadays.