The next stage of our journey starts in Bilbao. Founded in 1300, Bilbao is the biggest city and the capital of the most separate autonomy in Spain – the Basque Country. There are separate traditions to be kept, separate culture and language the origin of which has been discussed for tens of years by philologists.

Nowadays the main point of interest in the city is the Museum of Modern Art, an affiliated branch of the New York Guggenheim museum. The museum is situated in a futuristic glass and metal building, designed by a famous architect Frank Gehry. This building with the glass bridge leading to it is considered to be one of the modern architecture masterpieces Apart from the Guggenheim museum there is also a sea museum dedicated to the history of the city port and shipyards and we will definitely take a look at it. Being one of the biggest industrial ports in Spain (it is 5th in the country by sales turnover today) Bilbao has never in its history been actively involved in the colonial trade. The Basque have exported iron that had been actively mined around Bilbao for hundreds of years, buying Norwegian lumber and English and Dutch wool. Due to such inter-European trade orientation the city has never known explosive economy growth but has easily survived the economic difficulties that pursued Spain in XVIII-XIX centuries.

Since early Middle Ages Bilbao has stayed one of the main shipbuilding centers in Spain, and sailboats are still being built here. So in between 1968 and 1982 Bilbao launched 4 big sailboats including Cuauhtemoc – a usual guest of many sailboat festivals in Europe. The Bilbao port stayed away from the gold caravans and great expeditions to the unknown lands, but even here one can find traces of the pioneers. Bilbao lumber trade brought first money and first sea experience to a Dutchman Adriaen Block, the future founder of the New Netherlands, the Dutch dominion in North America between the English Virginia and French Canada. He was the first one to enter the Long Island strait and lay Manhattan down upon the chart. A replica of one of his ships – the “Onrust” stands in New York today.

While staying in Bilbao we will spend one day to visit another Basque Country coastal town – Getaria. Getaria is a tiny town inhabited by a little over 2000 people, but it gave the world the two most famous Basque sailors – Juan Sebastian Elcano, the first captain to sail round the globe (he continued the Magellan’s expedition after the death of the latter) and Domingo de Bonechea – the pioneer of the many islands in the Pacific Ocean who tried to establish Spanish dominion in the Tahiti.

After leaving Bilbao we will head West and exit the Bay of Biscay for the Atlantic Ocean. This will be the first oceanic passage in the history of “Shtandart”! We will make our little discovery together, entering the ocean for the first time and filling the sails with the Atlantic wind. 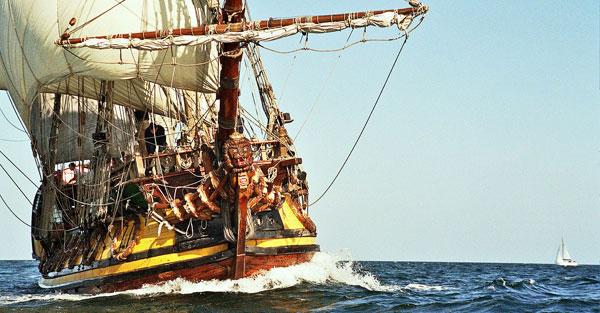 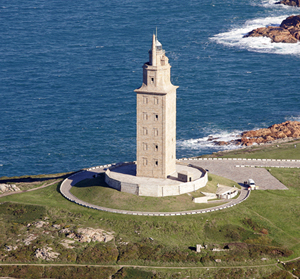 La Coruna port appeared in the II century A.D. in place of a more ancient Phoenician settlement when the modern Galicia had been taken over by the Romans. The Phoenicians, the first passionate discoverers in the world history are accredited with building the Hercules Tower lighthouse which is still the greatest symbol of the city. The Phoenician origin of the lighthouse is still to be proved but it is known for a fact that it had been working during the Trajan emperor’s ruling so the Tower is at least 1900 years old! Nowadays it is the oldest active lighthouse in Europe and it is on the list of the UNESCO World Heritage.

During XVI and XVII centuries La Coruna gained the name of a big Spanish trade and military base in the Atlantic, specializing on the Eastern trade. At that time the Spice Board (La palata de especierias) is based here – a trade company that had the monopoly for the modern Indonesian Spice islands trade. Year over year military and commercial expeditions are sent to Ost-India with the main purpose of destabilizing the Portuguese dominion in the Indian Ocean. Most of them will fail and the Spanish will not be able to make a lodgement to the East of the Cape of Good Hope, but these attempts will help the rampant development and enrichment of La Coruna. 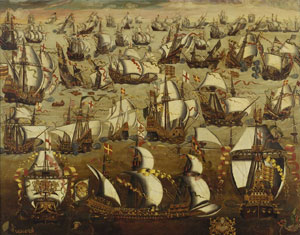 Probably the most famous part of the military history of the city is the year 1588 when the Invincible Armada, the 130 ship naval fleet collected by the Spain to invade England took the sea from here. Half of the fleet would be drowned by the English fleet and the severe Northern Atlantic storms. A year later the English commanded by the Armada conqueror Francis Drake came to La Coruna themselves but had to retreat after siege and a bloody assault. According to the legend the city was saved by a woman – Maria Pita, a monument of her is situated in the center of La Coruna. The military past of the city is reminded by a perfectly intact St.Antonius fortress built on an island in the La Coruna strait to guard the city and the harbor in XVIII century. Today it is open for attendance, there is an archeological museum inside.