Frigate Shtandart - History of the Original

300 years ago, upon the order from tzar Peter and governor Menshikov, began the construction of the first Russian ships for the new Russian Navy in which Shtandart became the flagship.

The name Shtandart signifies the new trade route that Russia had gained via the Baltic Sea. In 1703 Peter changed his standard by adding the fourth map of the Baltic to the previously existing maps of the three Russian seas. A new royal standard was created and in its honour the first Russian ship of the Baltic Navy was named Shtandart. 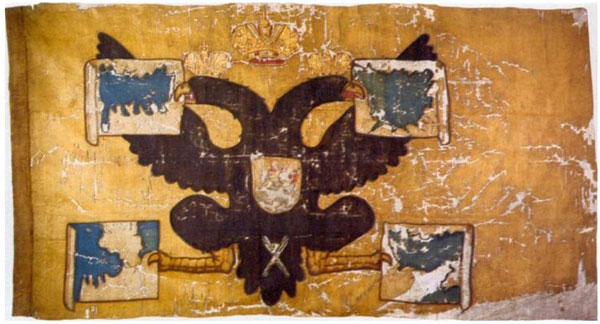 The art of shipbuilding

Russia’s military success against Turkey allowed Peter to claim a lucrative trade route to Europe – via the Baltic Sea. But to protect the Baltic land he needed a strong Navy. During his Grand Embassy Peter studied the art of shipbuilding. In Amsterdam “Peter and Paul” frigate was built and launched specially for Peter so he could watch the full building cycle. Peter received a certificate that stated that Peter Mikhailov “studied the art of shipbuilding to the extent that we are knowledgeable in it”. But Peter was not satisfied with that knowledge. The reason being that the Dutch school of shipbuilding relied heavily on practical experience rather than the precise theoretical knowledge and calculations. The knowledge and secrets of the craft were passed down from father to son. To use this method of building in Russia would be impossible, as Russia did not have generations of carpenters, riggers and cutters. So Peter needed to learn a more structured science and after Holland he proceeded to go to England, the country famous for its precise, formalised and structured approach to everything including designing and building ships.

There was another reason Peter wanted to go to England. William III promised to give to his brother Peter the Royal Transport, a yacht of incomparable beauty and speed... Thus, having spent 5 months in Holland, Peter spent another 4 months in England, travelling and learning from shipwrights and admirals. So what did he learn during that trip? Apart from 500 experts that Peter hired to work in Russia, he also brought with him technologies and innovations for various industries but in particular for his most beloved shipbuilding. 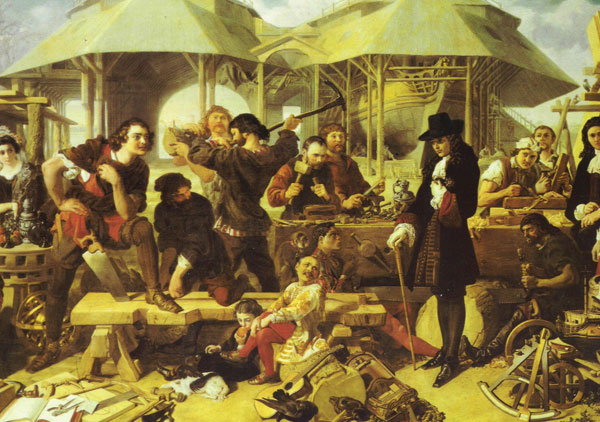 The chance to apply the new knowledge came very soon. The building of new ships for the Baltic navy began in 1702-1703. The second shipyard (Olonetsky shipyard) of two newly constructed ones, proved to be more successful. In just 5 months, working literally in an open field and building the shipyard as they went along, the first 10 ships were completed. The biggest among those was the 28 gun Shtandart, chosen to become the flagship of the new Baltic Navy. 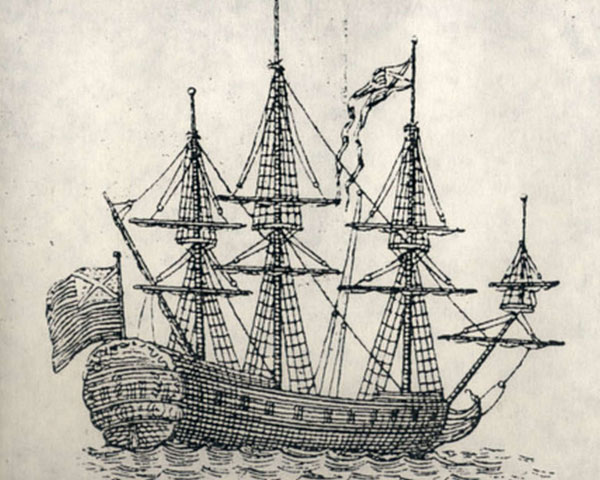 The work was overseen by the Dutch and English masters, as well as the Russian specialists who studied shipbuilding during the Grand Embassy. Tzar Peter himself did many designs and technical drawings and he would only entrust his projects to the best of his shipwrights. Among them was Vybe Gerens, who by that time had already gained a eputation of being a talented shipbuilder. He was responsible for the construction of the 38 gun vessel in Voronezh and Archangel, also building two 8 gun yachts and even another ship with 68 guns. He was given the task to build the “Tzar Ship”, later called Shtandart.

Sadly Peter’s drawings did not survive. But the look and the structure of Shtandart was carefully recreated using the data from the Olonetsky shipyard and results of more than three years research by a Russian historian Viktor Krainukov. 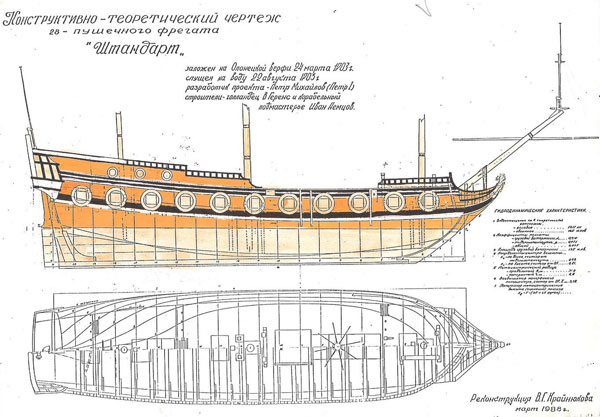 Shtandart gives us an interesting example of the combination of two very different building styles.

The Dutch needed their ships to be comfortable in shallow waters, as many of them were built in areas with shallow canals. Compared to the English ships of the same ammunition the Dutch had a much smaller draft. In the deep open sea where anchors can’t reach the bottom, it was crucial to have the ability to beat along the wind. This is what English ships have always been famous for. 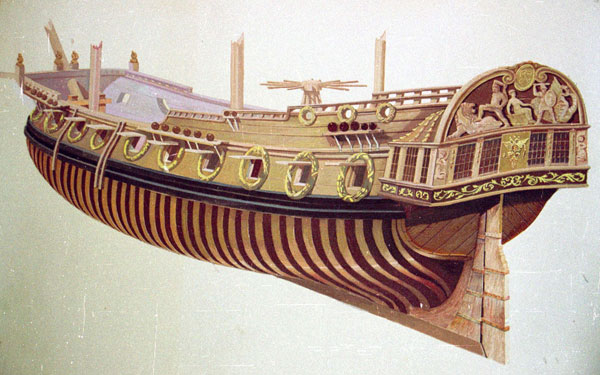 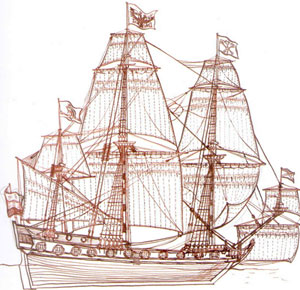 Designing Shtandart, Peter used the best practices from both schools: the smaller draft necessary for navigation in the Gulf of Finland and the high elegant rigging of the English. Peter himself was involved in the building of Shtandart. He’d been present at the Olonetsk shipyard since July 21 1703. It was probably due to his energy and determination that the construction was finished within only five months. His people worked until dark every day, and we know northern summer days last a long time…

In a very short time, only two weeks in fact, the masts and sails were ready. On September 8, 1703 Shtandart set sail for St-Petersburg under the command of captain “Peter Mikhailov”. The flotilla of ships arrived at St-Petersburg in the middle of October.

During her 16-years of service Shtandart had several captains. Their names tell a very international Navy history of the time:

Disrepair and the Empress's Decree

A few years later the result of the hurried constructions began to show their effects. The timber was not dried properly, the ship came to a state of disrepair and was scheduled for retimbering.

The repaired Shtandart continued service until 1719, when Peter decreed the frigate to be preserved forever as the first ship of the Russian Navy and a monument of the art of shipbuilding.

In 1727 a special commission ordered by Katherine I checked the condition of the ships and decided to bring Shtandart ashore to be restored. But water and time had already done so much damage that during the lifting attempts the cable actually cut the hull in sections. The old Shtandart was taken apart with a new decree from the Empress: “In honour of the name given by His Majesty Peter I will build the new one”.

This decree remained unfulfilled until the late 20th century when the modern exact replica Shtandart was build in St-Petersburg by a team of enthusiasts and volunteers led by naval architect and sailor Vladimir Martus. 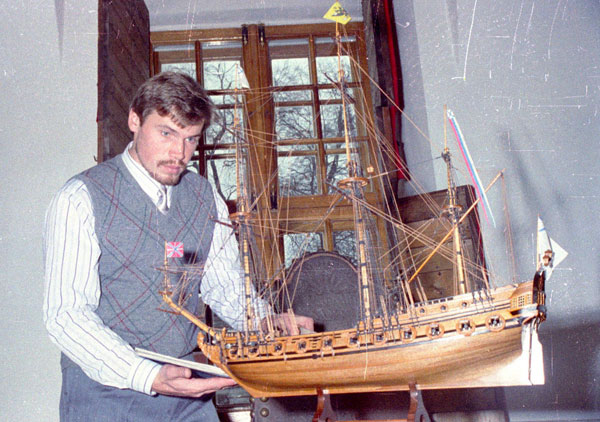