The Latvian main river is called Daudava, we Russians say ‘The Western Dvina’, and flows right through the center of the capital city, Riga. Walking down the embankment, you can’t help making lists of epithets for Riga, such as marvelous, tidy, elegant, fragile, even gingerbread – everything fits. And the diadem of hundreds of sailing ships, which came here for the start of the last part of the TSR, fits Riga, too. 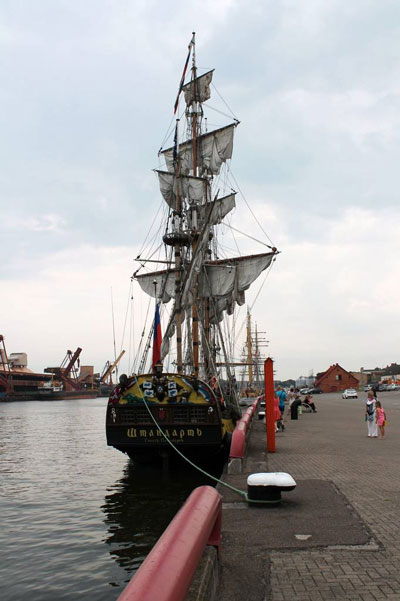 The frigate “Shtandart” with her historic look is bound to be noticed and ends up surrounded by enormous crowds speaking every possible language. The frigate had ‘open ship’ all day long. Visitors came, took flyers, tried to turn the steering wheel, took pictures with the crew. Even at 10 p.m. the crowd didn’t reduce much. The crew begged everyone’s pardon: ‘We’ve got an order, sorry! No more visitors for today!’ You can hear people’s comments on the frigate:

— We’ve come specially for your ship! – the local club of historical reconstruction members said. They paid their visit clad in their ancient garments. – And that guy is a Swede, you can have him as a captive! 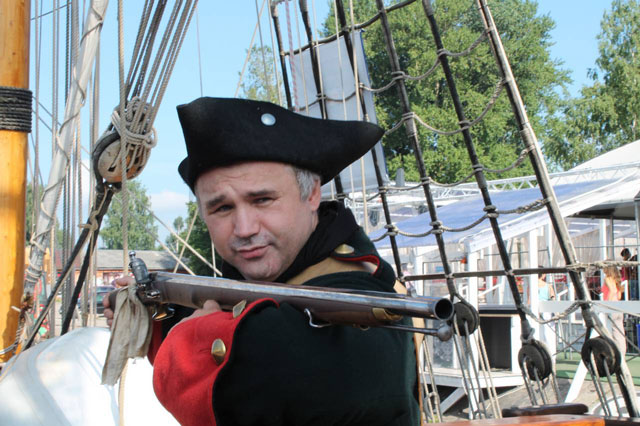 A painter was sitting on the quay and portraying the ‘Shtandart’s’ beautiful silhouette.

— I’ve got a particular interest in your ship, he said. My diploma project was a composition ‘Triumph of Peter the Great’. There were many ships there, but I didn’t really like the way I had got them there. And here I see real history! 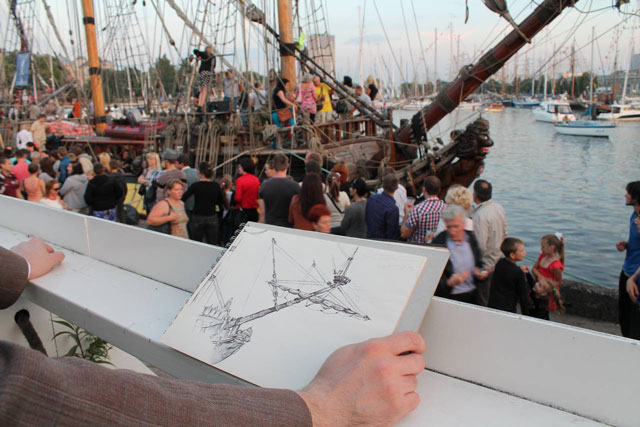 Next day the ships had to sail towards the place where he race had to start. During the Parade of Sails every ship tried to do her best. There, the ‘Shtandart’ met the president of Latvia, who came to open the regatta. Our ship saluted him shooting her cannons and shouting ‘Hurray’! 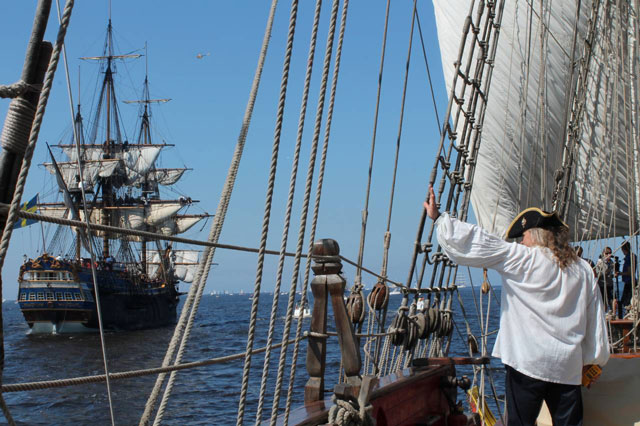 Right after this, the frigate was attacked by small boats shooting at us from both sides with tiny plastic bags filled with water. Then they ran away so fast that our fire hose came as a much retarded revenge. 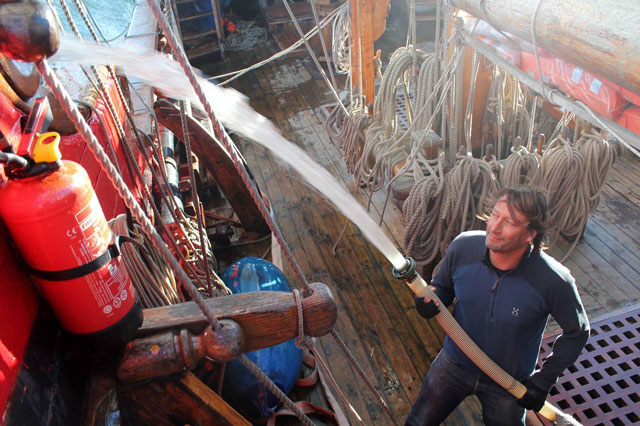 In the evening, Mitya, our officer, instructed the newcomers, who were timidly touching the ropes and kept confounding the terms. Lena, one of the experienced crew members, reassured them: ‘Personally, I fully understood how the ship works only three years after I first came aboard.’ By the way, all new crew members are thoroughly instructed, especially before a race. 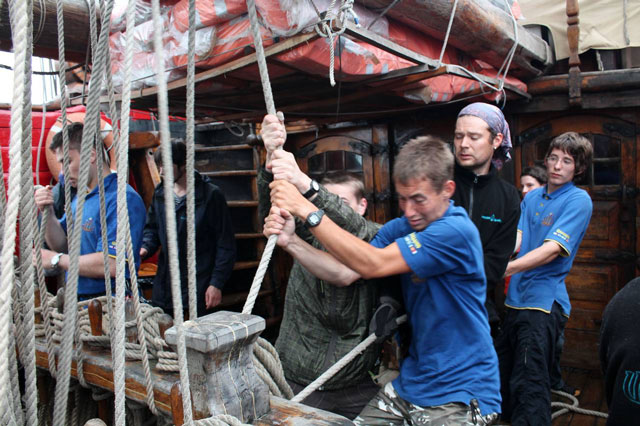 You certainly know what “The Tall Ships’ Races” are. This is one of the few races known even to people not connected to sea or sailing. This regatta is one of the oldest in the world, it first started before World War II and is over 60 years old. Its original name was ‘Cutty Sark’, and its mission is to support international contacts, friendship and understanding, as well as maritime traditions. Half of each crew has to be between 15 and 25 years old, for it is a race for training ships.

Every year the regatta takes place in various parts of Europe and consists of several races. The final race in 2013 was held from July, 29 to August, 2 in the Baltic Sea, from Ventspils, Latvia to Szczecin, Poland. The race distance was 305 nm. 97 ships took part in it, 20 of which belong to the class A – real ‘tall ships’, big and beautiful. The ‘Shtandart’ belongs to this class, too.

On July, 29 the day started with cleaning up, as usually. We ordered everything, prepared for the race start, checked, fixed and rechecked. Even the big Russian flag, which had got a bit weather-beaten, was repaired and displayed proudly on top of the main mast. 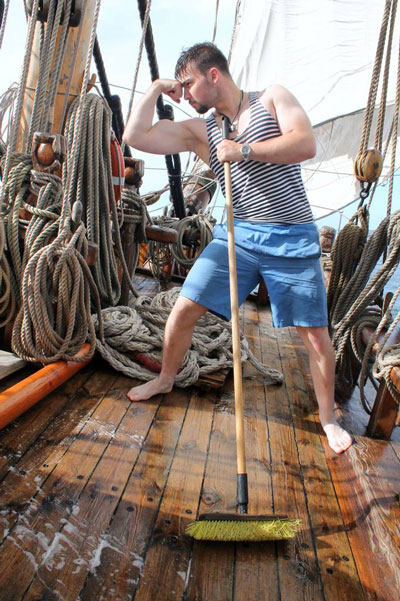 The captain told the crew about the coming race.

— It’s supposed to be exciting. The wind is going to change several times, in the second part of the race we’ll have head wind.

He explained, that it’s worse for ‘Shtandart’ than for more modern ships, for we don’t have a keel, and our historic hull shape isn’t perfect for tacking. ‘Fair wind is the best for us. In tacking we’ll get slower than others’. 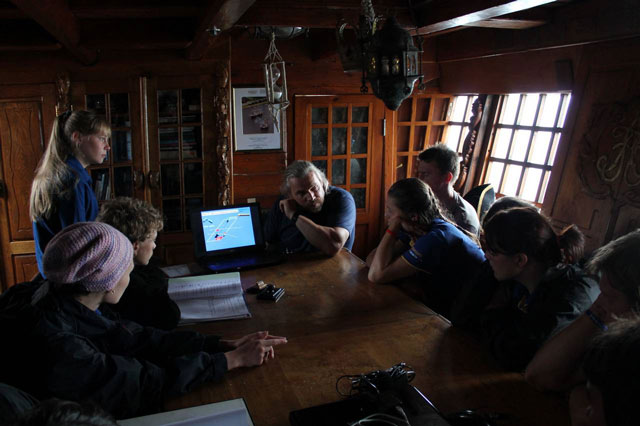 As the strongest rivals he named to Norwegian ships - «Statsraad Lehmkuhl» and «Christian Radich», and the Swedish «Tre Kronor Af Stockholm».

The race started at 7.00 p.m. At first, the wind was fair, and we swiftly sailed ahead. But on July, 30th the morning and the evening were like in two different worlds. The Captain’s ‘good morning’ was accompanied by such news: ‘Those who wanted to see the ‘eye’ of the cyclone – here you are. This‘ll last until noon, and then it’ll get really exciting, for we’ll reach the cyclone’s edge.’

The ship was clad in all shades of grey – grey overcast sky, waveless sea reflecting it, speed of about zero… After 5 o’clock, a storm came from a side, which was good for our speed and brought us to the 6th place in our class and the 13th overall.

The morning of July, 31st started with a fire alarm signal and smoke in the galley, the crew jumped on deck… the reason turned out to be some burned pancakes which set out the alarm. Our German crewmember Sven, the author of the mayhem, explained: ‘It’s a special recipe, called Fire Pancakes’!

“Welcome to the Bahamas!”, the Captain said, ‘the next two days will be sunny, some rest is allowed’. People in sleeping bags lay on deck like big caterpillars. For some of them it was a cure against seasickness.

But strong wind and the ship’s heel had their effect: We had to pump, all the port side was wet – rugs, mattresses, the galley was so lopsided that you couldn’t cook. The little flood brought some funny flotsam – a couple of chocolates drowned over ten years ago.

During the race bathing in the sea was not allowed. But the problem was solved easily – the fire hose which is also used for washing the deck proved handy in yet another way. Screeching and shouting, the crew enjoyed the ‘Maritime massage shower’. 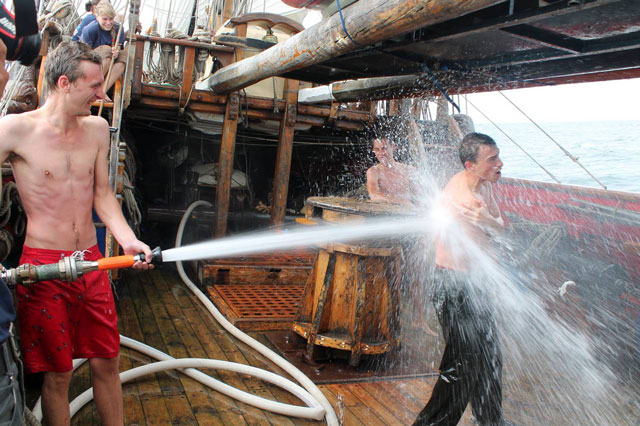 At the end of the day the wind changed again, and we had to tack after all. Whereas at the beginning of the race we had a direct course, now great zigzags came, tothe shore – seawards again, a-and back again. Other ships didn’t have it easy either. So, on August, 1st we were the 5th in our class A and the 12th overall.

The race was supposed to finish at noon, on August 2nd. But the time was changed, for the head wind could prevent some ships from reaching the port of Szczecin in time for the festival. So, the race ended at 3 a.m. on August, 2nd, and we had to make the final sprint. Despite all the tacking difficulties predicted by the captain, we ended up on place 9 in class A and place 48 overall.

— The rating is not so important, — the captain said. — What matters much more is, whether the race was exciting. Did you like the race? Me too!

So, in the night it was all over. We turned on the engine and headed for Szczecin. To be continued!