The start of Tall Ship Races in Aarhus

Early this calm morning we have arrived at the deserted port of Kalmar, Sweden. Thus, we made a half way across the Baltics from Denmark to the Estonian shore. After noisy crowded Aarhus it is hard to get used to the stillness of the small port full of Swedish flags. While we are filling tanks with fuel and water and half of the crew has disappeared in the sunny streets of the old town I will tell you the story of the Tall Ship Races start and the festival in Aarchus. 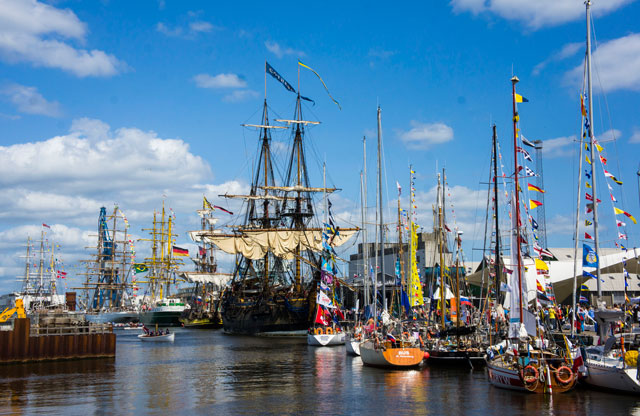 When Shtandart came to the port of Aarchus several days ago, she instantly became a hero of the day, sharing honor with Gotheborg after the spectacular battle they had performed. The moment we set the ladder, a loud noisy crowd poured to the main deck, then it filled the upper deck, and the whole ship started sounding like a Danish radio. As soon as the idea of escaping this crowded boat only comes to your mind and you make a first careful step from the mess room to the alluring daylight, golden-haired Danish kids steal your hat, or somebody puts his heavy foot on your shoulder while stepping off the ladder, and you finally get drowned in the cramped loud throng on the deck… 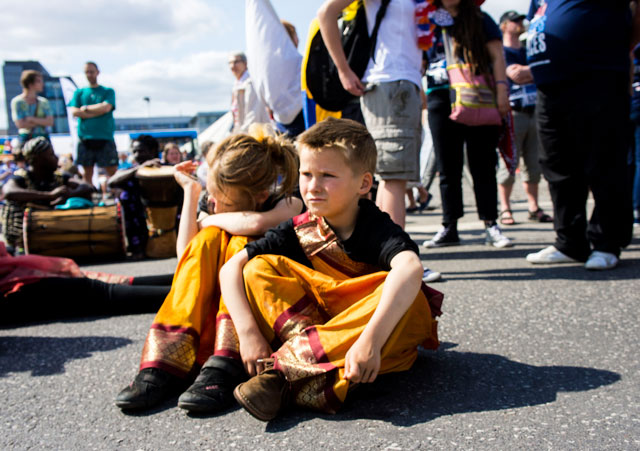 You give the last look of sympathetic acrimony to the watchman who is guarding the ladder. And then you dissolve in this motley whirl of bright eyes of young sailors and wrinkled faces of the old ones, peak-caps and high-collar jackets of the officers with golden stripes on their sleeves, curious faces of Danish and German tourists, smiling children sitting on their fathers’ shoulders, white turbans on the Arabian sailors’ heads… All that seems to be a melting pot we have just drawn into to enjoy the bittersweet taste of the port life after pleasures and hardness of sailing. 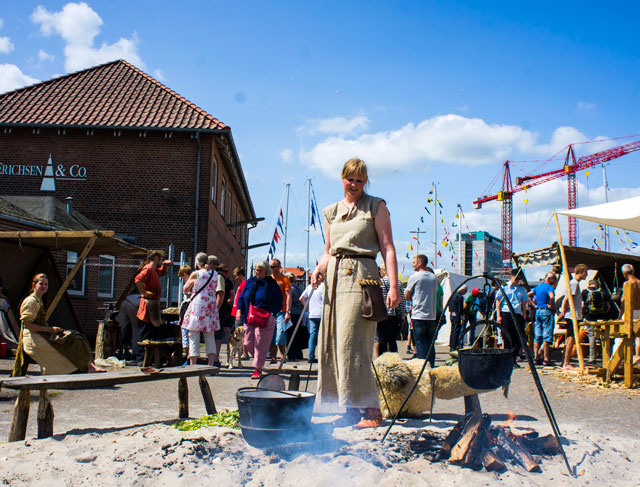 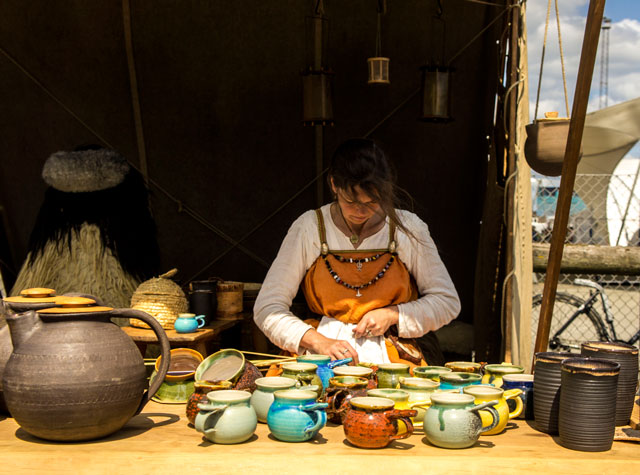 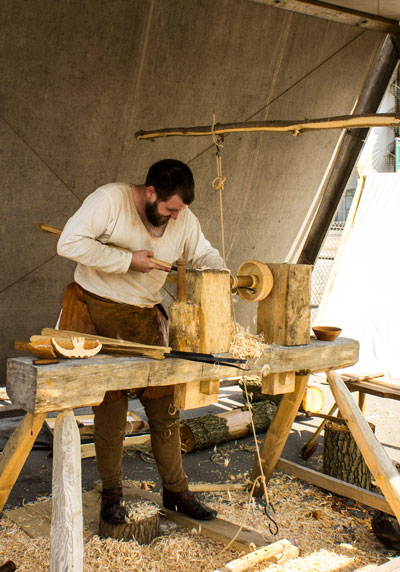 When you hide from the festival fuss and come to the silent evening streets of Aarchus, you suddenly discover the big central church which elegant silhouette appears as a dark tower between the small houses. The paved old streets make a labyrinth where you become finally lost and find yourself only few hours later drinking coffee with some Danish students, telling your sea-stories to them. Then you remember the time and start to run back to the ship through the darkness and streetlights, down to the pier, out of breath you jump up to the deck and see your watch officer, wise and sad, keeping the watch alone, because all his sailors sneaked away and got mixed with the crowd. In Aarchus we got many things to do: the ship was opened to public all day long, we had about 60 persons as special guests for a few hours in the evening. It was the galley that was a real hell those days with nine circles of buying food, preparing it, cooking, collecting used plates, washing the dishes, entertaining guests and falling on the deck exhausted when the last occupant left the ship in the evening… But on the other hand it was nice, even too nice, that is what you realize during the breakfast lazily putting the spoon full of black caviar into your mouth with a heavy sigh: “We gotta get rid of it”. Day with such an intro cannot be bad, so now I`m going to tell you what things usually happen with Shtandart’s crew at port.

The main event for the crew in any port is a Crew parade. Those guys who sailed with Shtandart many times say there will be nothing extraordinary. And I must admit it is not extraordinary, it is just one of the things which makes you stand motionless and only turn into eye and ear. 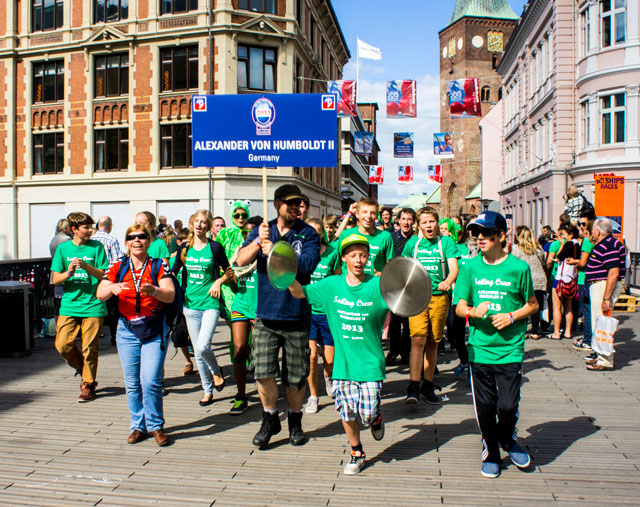 Crews of all the ships in harbor (and, believe me, there were plenty of them) carried blue boards with the name of the ship and the country it came from, bore flags. The sight of the participants was totally captivating: they were dressed in uniforms, fettered to the toy-masts, were carrying anchors, playing music or just singing. All that great amount of people made an extended row more than a kilometer long, while all high points around were occupied by photographers, the audience stood on the both sides of the parade`s route. Everybody was waiting for a signal to start. When we heard the sound the whole one kilometer snake began moving rattling with the scales made of crews. The way ahead was quite long – around a nautical mile along the streets of the old town, across the main square and the canal over small bridges and then down towards still emerald waters of the harbor. 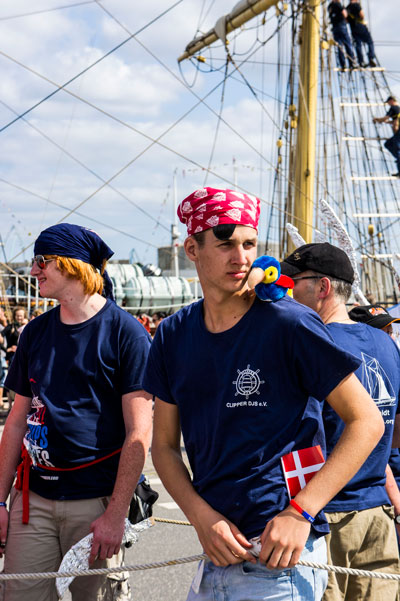 It is very interesting to realize how different the people in the crews are, what they are, what unites them and makes them a CREW. All these guys with the eyes white from the blessed salt of the seas are hopelessly sick. This disease is well known but merely studied, it is chronic and it is becoming acute when they step ashore. This illness is called “mal de terre” in French, but opposite to seasickness it is a state of mind and history knows no example of successful recovery. 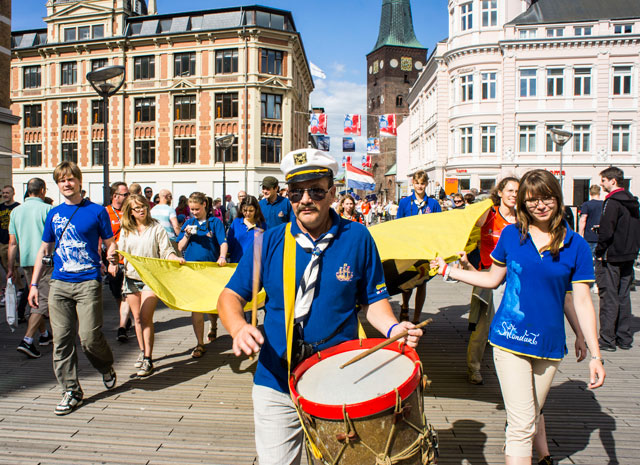 Shtandart’s crew was marching with the huge yellow Petrine standard, everybody was in blue uniform T-shirts. Next to us there stood nice guys from Finland wearing the costumes of bears and bees, with high-voiced violin and a couple glasses of beer. Behind them one could see a funny Polish crew all in striped vests and their constantly smiling officer in sun glasses with the white-red flags on his cheeks. Three crews further formed a big white square – Russian sailing ship Mir’s crew. All of the sailors in snow-white ironed shirts, keeping the line step by step, never stumble or make any other mistake. Green chaotic wave of Von Humboldt’s crew tried to tear the formation apart, German youth with wild screams, dancing and jumping tried to sneak through the lines, but none of the sailors from Mir paid any attention to them. Try to imagine how hard it could be, to be a young seaman and keep the discipline when the African drums were roaring around, Finnish violins were howling, wild Dutch guys in orange suits were shouting and jumping around the lonely car lost in this rowdy stream. But they did, and all that made us think of the prestige and power of Russian navy that still exists and takes young sailors into its lines.

The parade finally came to where it had started, to the wide pier where Shtandart and Gotheborg were moored, and all the space got crowded, the long motley snake coiled up in front of the stage, where a young Danish singer with beautiful deep voice was singing shanties. 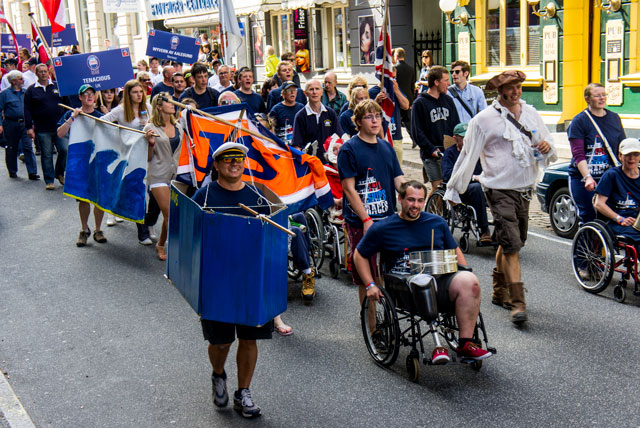 Weary but content you come back to the ship being followed by the sounds of Russian folk songs and Spanish passionate guitar… There is no need to ask who the heroes of the evening are, the answer will be obvious: for sure it is one of those with whom you have been pulling the ropes for a week and who kept their talents in secret for the special case.

But the life goes unceasingly and it never stops, giving us new experience and impressions that soon will become memories going pale and then gone, but now they are precious moments. And the frame is: all the crew in historical clothes are going step by step headed by Captain to the Crew Party. No sense in telling the story about the energy and meaning of that event for the sailors who came there from the sea, and some of them across the ocean.

Bursting fire of crazy salsa with seamen from Brazil that you dance passing through the immense hall, walking accurately between the tables, squeaking from the bottles of wine and plates of tasty sea food. Hundreds of people in high-collar jackets are shuffling in this whirl of dance, in the international conversations and joy coming straight and sincere from the hearts of sailors.

The sun was going down and the dancing ended, the crowd splashed out the hall to the dusky streets of Aarchus on their way back to the port. We were accompanied by several guys from the Brazilian ship, they were a bit sprung and wanted to talk to us. From all the languages we knew we were unable to find any we could speak to understand each other. The only international thing we could catch in their emotional portugese speech was “amor”. We thought that “No” would sound too harsh, so we heartily waved good bye and said “manãna”.

But manãna we had many other things to do, fussing around the town to find everything we might need during our long way across the Baltics. Some people went ashore and new ones came to sail further. When Shtandart was ready to leave the port and the vessel in front of us started moving away we heard:

But it is quite a different story.