The Voyage to the Canaries has begun!

Today, on October, 14th, Shtandart has set off for her first voyage to Canary Islands. She is going to pass along the coasts of Holland, France, Spain, Portugal and Marocco, then across the North Sea, Bay of Biscay and the Atlantics. 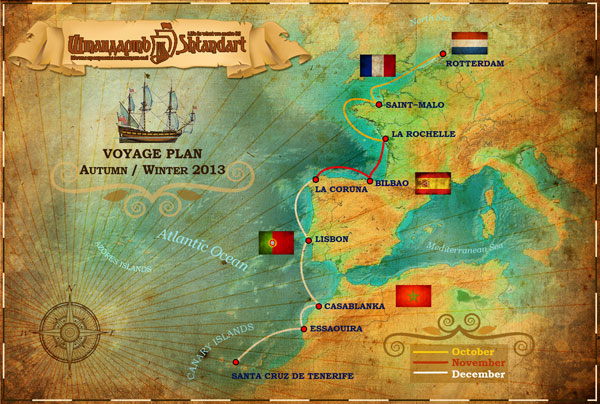 For the first time in her history, the frigate will visit the ports of South Europe and Africa: Sait-Malo and La Rochelle, Bilbao and A Coruña, Lisbon, Casablanca and Essaouira, and will finish her voyage in two and a half months in Santa Cruz de Tenerife. This winter Shtandart will spend exploring Canary Islands.

We had had a long and complicated preparation for this journey: since the beginning of September the crew and volunteers had performed thorough repair of the ship in the dry dock in Holland.

A lot of discoveries are awaiting for our ship and her crew: new places, new people and new impressions. Very soon they will be able to follow the routes of the explorers described in our project “People of Steel”, which accompanied the preparation for the “Ocean Raid”.

It is not too late for you to become a discoverer yourself and join our crew: there are still vacancies for some legs!

For those who have no opportunity to go sailing with us, we will do our best to tell about the voyage on Shtandart’s website. Trace the vessel’s location in real time with the help of the online service Marine Traffic! And from time to time our mew media crew Sasha Kosukhina will appear on air of Russian radio station “Silver Rain” in the programme “Something Good” and share her new impressions with you!